skip to main | skip to sidebar
Just another egotistical bum who feels the world would benefit from his daily, blue collar observations and philosophies. 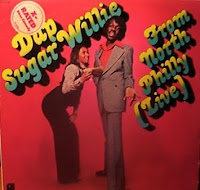 I have this little hobby that sometimes becomes very informative. I like to find someone on a show, in a movie, or on an album that had a small part and see what else they have done....and whatever happened to them. Often these auxillary participants have a story of their own. Sometimes they remain a complete mystery. But usually I end up learning SOMETHING cool in the process of research. And research in today's world is as simple as typing this blog. Infact, this blog itself could possibly end up in a search for today's spotlighted subject: Dap Sugar Willie!

Dap comes from North Philladelphia and was an X-rated comedian of the 60's and 70's. He run in the same circles as Rudy Ray Moore, and his good buddy Red Foxx (who subsequently got him involed in the limited about of tv work he end up doing). Eventually releasing material on Philladelphia International Record, he got his break nationally on "Sanford and Son". But his biggest break came when he became a semi re-occuring character on "Good Times" in the form of Lenny.

Now, I'm a "Good Times" fanatic. My first crush was Thema...I wanted to be JJ....and I wish James Sr was my dad. And I loved the other characters such as Bookman, Wilona, Alderman Davis, Carl Dixon, and Sweet Daddy Williams. But Lenny was my favorite.

So I researched him and found little info. He didn't do much past Good Times. The only real name I can find associated with him MIGHT be "Anderson". His biggest payday probably came in his supposed small role in the 1986 movie "Wildcats". And that he may of passed away in 1995. Sad.

Well, if you read this whole blog...then your life is just THAT much more enriched with more useless knowledge! And my life is also enriched with the same knowledge....plus the Dap Sugar Willie 45 vinyl record I just bought on e-bay!

All heart, no skill.

JW
Charlotte, North Carolina, United States
I'm a trucker. A greenhorn at the moment. I decided to restart into a new career at 43 years old. This should carry me through until retirement in about 25 years.